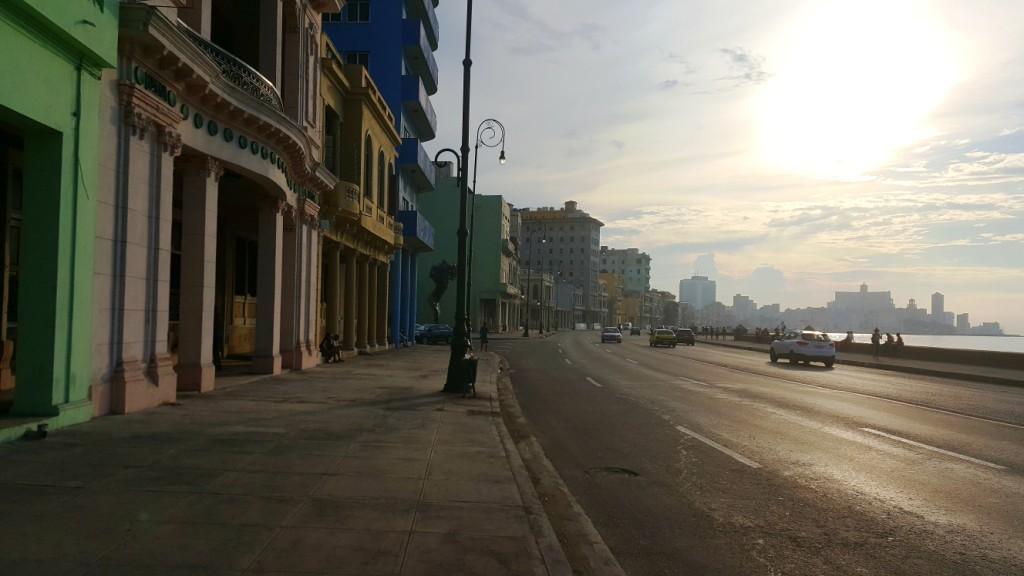 Irma Effects on the Malecon are Dramatic

My son, Jeff and I were in Havana just before Irma hit the island, staying in Casa Deysi in  Habana Centro . We debated whether to stay or not, but having just gotten through Hurricane Harvey in Houston (no wind but 50 inches of rain) we decided one hurricane was enough. Thus, we did not stay to see Irma effects on the Malecon, but I show some “before” shots that I took and “after” shots taken from news outlets.

I have been through many hurricanes on the Texas coast. Being without power for  a week or so is not enjoyable in the heat and humidity, but at least I was at home. Being without power and water in a foreign city would have been worse. Also In Houston, we were 50 miles from the ocean; at Casa Deysi, we were just 500 feet from the Malecon  and the water.

The photo below was taken on September 3rd on from the balcony of the paladar  Castropol, overlooking the Malecon. Having mojitos and looking over the water is perfect way to welcome yourself back to Cuba.

After  sunset we got another drink and sat on the seawall along with hundreds of locals. It was a warm, muggy evening, similar to Houston temperature. No air stirring in Centro Habana, but a steady, welcoming breeze on the seawall.  This is the ideal way to wind down your day before going back to the casa.

The Malecon is the iconic image of Havana. This broad curved boulevard runs along the water. The sea wall on one side serves as a couch for Havana life. The backdrop is the line of the crumbling mansions attesting to Havana’s wealth just before the Revolution.  Driving along the Malecon and sitting on the seawall are one of the Top Things to do in Havana.

This photo too was taken just a few days prior to Irma.

Photos of Irma on the Malecon

Two days after we left hurricane Irma scraped along the northern coast of Cuba, from Camaguey to Villa Clara and up to Havana. It turned somewhat north as it got to the capitol city, or it could have been worse.

The Los Angeles Times published these API photos of Irma effects on the Malecon.

To get the full effect of the size of the waves and the surge of hurricane Irma, look at the calm, majestic lighthouse in my image at top, then look at image of waves crashing against it in the Reuters photo below. That is definitely an impressive wave.

Cuban people are tough; they help each other overcome the trials of daily life on this island, and they will help each other get through this too. The power and water situation is tenuous on any given day. It doesn’t take much to knock this out.

I understand the Cuban government is good at disaster preparation. Storms usually cross the island though, limiting the scope of the damage. This one affected almost the entire island, so recovery will be slow.